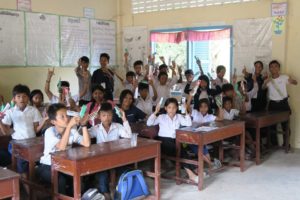 In Cambodia, a large percentage of the population lives below the poverty line. As in many developing countries suffering the aftermath of war, unschooled and underprivileged children beg for an income of less than one dollar a day, which they bring home to their families. Under these circumstances, it is hard for parents or guardians to allow their children to go to school since it could cause the family to starve, yet the children are usually eager for an education. Thus the objective of The Global Child is to afford underprivileged street-working children the opportunity to obtain solid schooling in two languages by subsidizing students one dollar for each day they attend school. Students are paid their subsidy weekly. They are taught a form of micro-financing (only without repayment), allowing the school to instruct students on how to wisely manage their monthly funds to attain sustainable home projects or future savings, thus learning business acumen from the start.

In 2003, the current Director of The Global Child, Judy Wheeler, was President for the Designer Outlet Stores in Manchester, Vermont. Judy hired Allan Scott-Moncrief, a Scottish painter and film-maker, to put on a film festival as an event to promote the outlet stores around New England.

Allan had just come back from Cambodia where he’d been making a documentary film. He told Judy how impressed he was with the intelligence and positive attitudes of the street-working children he’d encountered on the streets of Phnom Penh. He discovered that nearly any of the street-working children went to school, or had ever been to school. They had to work the streets begging or selling small items in order to earn about one dollar a day so their families would have enough money to eat.

The Global Child in Phnom Penh

The 26th child to be admitted, a 12-year-old girl named Pisey, had walked 15 miles alone in her bare feet all the way from the notorious Stung Meanchey dump to Phnom Penh to ask to be admitted. She was living

with her family (and 2,000 others at the dump), surviving by picking through garbage for anything they could sell. These are photos taken during the filming of a school documentary, showing Pisey at the dump and shortly after she started attending TGC. 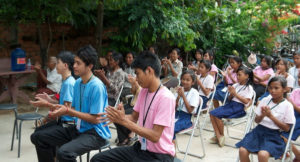 A Cambodian staff member was hired and a lot of time was spent establishing and maintaining good relations with the Cambodian government. As some kids were orphaned or lived in an unsafe environment, the school also had a safe house where most of the students lived, with boys separate from girls. Every student received three free meals a day at the school. Clothing was also provided in the form of simple school uniforms.

The Global Child in Siem Reap 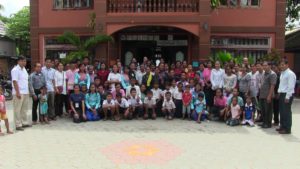 The school in Siem Reap is located in a more rural setting and consists of two buildings – the school itself, and another that houses six students and some staff.  The other students live with their families. Since moving the school to Siem Reap, TGC has been admitting students that are not orphans but are often former street-working, or potential street-working children because their families are so poor.

Siem Reap is very close to the temples of Angkor. Each year over 700,000 tourists visit Angkor Wat, making it one of the top tourist destinations in the world. There are over 400 hotels in Siem Reap to meet the needs of those tourists. The city of Siem Reap is now a booming town, with numerous hotels, bars, restaurants, retail stores, and museums that cater to a large number of tourists that arrive each day.

In December 2007, the school started a coffee shop called Joe To Go, located in the Old Town part of Siem Reap. A generous donor provided the funds for this venture with the hope that someday it could generate profits that could be used to support the school. In 2009, a gift shop upstairs called Beau Fou was opened that sells clothing, accessories, and gifts.

After sixteen years in continuous operation, we are very proud to have achieved success in fulfilling our mission and seeing some of our students go on to do great things.  Help us operate for another sixteen years!

If you are interested in learning more about our mission, working with The Global Child, or donating, please do not hesitate to
Contact Us
Email Us